Have you heard of A/B testing? Or maybe you’ve heard it referred to as split testing. Same idea, different name. It’s the best way to get the most bang for your marketing buck… Maybe more importantly, it’s the best way to ensure that you’re maximizing results for your effort.

It’s the old, “In for a penny, in for a pound” concept. If you’re going to go to all the trouble and expense of running a Facebook ad, don’t you want to make sure that the image and language will elicit the best possible response from your target audience? And if you’re going to send a newsletter, wouldn’t you like to maximize your chances of people actually opening up your email and reading your content?

Strategic testing can make all of the difference in the return you get on your marketing efforts. It takes the guesswork out of ad copy and design. Whenever we create a Facebook ad, we always make two (or more) variations of the visual and the accompanying text. We may use slightly different language on each of the visuals, and the visuals themselves may take completely different approaches. The idea is to start the ad testing with just $25 to $50 to determine the response, and then invest the full ad budget in the more successful of the two ads.

No campaign is too big or too small to benefit from A/B testing. Whether your ad budget is $100 or $5000, split testing gives you measurable numbers so that you’ll know exactly what appeals to your target customers. 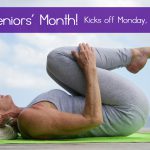 Our client Yoga Spirit & Wellness, runs an inclusive and welcoming yoga studio in Vancouver. We recently ran A/B testing on a campaign to promote a special Yoga for Seniors series. The campaign included two different ad designs. The first took a traditional approach and included a photograph of a mature woman practicing yoga. On the other hand, the “B” image took a completely different approach with a cute photo of a dog wearing glasses! 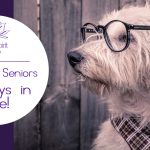 Why a dog wearing glasses? Because this yoga studio loves dogs and encourages lightheartedness, and because one of the two top hits and click through rates on the internet is pet photos. (FYI, the other top hit is food photos.)

We started out with a very small test budget of just $10 on each of the two test ads to determine which visual and copy would get a better response. The idea was to then put the full ad budget into the variation that garnered the most response during the test period.

Sometimes ad results are very definitive, with a landslide of clicks going to one of the two variations. That makes it easy to know which of the ad approaches was more successful. In other cases, the results are closer, and that’s what happened with the Yoga for Seniors campaign.

While the B test took the lead on cost per click, the A still performed well and we decided to extend the test period and budget and continue the testing for a longer period. If we had wanted to take it a step further, we may have done A/B/C testing with a third variation of the ad.

And here are the results for a very successful campaign from early May 2017.

Sometimes, you may think that you’ve created a great ad, but when you’ve run A/B testing, you can actually back that assumption up using real numbers.

The same approach is very helpful for subject lines for your newsletters and e-blasts to determine what title will entice people to open and read your content. As we all know, if your title isn’t interesting, all your hard work will go in the trash or, worse yet, into the spam box. If no one is reading your newsletter, then it’s a big waste of your time and energy. Split testing will ensure that your language elicits the clicks you’re looking for.

For your next newsletter, it can be as simple as brainstorming two or more variations of your title. Some variations might be in the form of a question, others in the form of an offer or a promise. All of your subject lines should be as thought provoking as possible to elicit curiosity. Maybe shorter titles are more effective, or all lowercase, or titles that include a specific word. At the end of the day, you want to know what factors affect your subscribers or followers and how you can best engage that group.

Some services, like Mailchimp, are able to do the split testing for you, or you can conduct and control the experiments yourself by comparing your own analytics.

In addition to split testing your subject line, you can experiment with different From names, or delivery dates and times. Maybe you’ll receive better open rates on Tuesdays, or maybe subject lines that include an incentive will be the most successful. It might be interesting to know if subscribers are more likely to click an image link, or linked text.

A/B testing is worth the time and effort and gives you real results and insights about your customers. Entrepreneurs and internet marketers who consistently conduct A/B testing get higher open rates, increased conversions, and insights into customer behaviour and preferences. If you need help with Facebook ads, e-blasts, or other online marketing, don’t hesitate to get in touch!

Mandi is a social media marketer, copywriter, and project manager for Barker Social™. She's a results-driven planner with an unstoppable ability to churn out quality marketing content. Her creative spirit, project management skills, and copywriting ability make her a marketing dynamo. She is also a bird lover, health foodie, jazz enthusiast, and swing dancer.

How To Change Your Facebook Page To A Local Business

Is Your Business Right for Influencer Marketing?